Whatever happened to Historical Materialism?

Here must all distrust be left; All cowardice must here be dead. 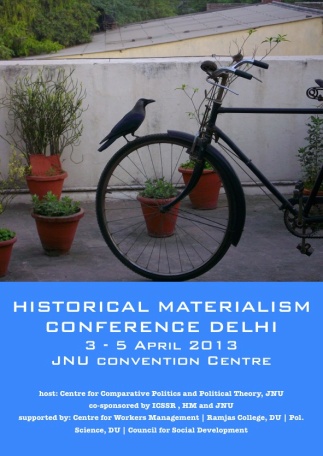 We see a timely retrieval of interest in historical materialism within the academy, if the Delhi HM Conference Programme (“New Cultures of the Left”, Convention Centre, JNU, 3–5 April 2013) is a marker of such resurgence, which indeed it is. This renewal germinates from the world wide movement of the workers and the dispossessed as late capitalist crisis sharpened. Occupy movements in Europe and North America, the Arab Spring, anti-capitalist and anti-land grab movements in India and recent workers’ movement in Manesar Plant of Maruti Suzuki, NCR Delhi (observing 7th day of fast unto death) which shake the barley by exhibiting this crisis. In this context specifically, we admit that we like to hear about Marxism-Leninism in classroom, but cautiously so. Here we are clearly distinguishing ourselves from all postcolonialist positions in the garb of revolutionary/radical theories, specifically from the disenchanted lot who have distanced themselves from this big conference. Any attempt to confine Marxism only within classroom and in the universe of hardcovers and paperbacks disappoints us because of our stake in Marxism, not a distance from it. This ‘new’ old culture of academicization and sanitization of Marxism is evident in the overwhelming eclecticism of the conference. Academicization of Marxism (much like Legal Marxism of 19th Century Russia) can imply two things: a pressure from below that compelled institutions to rigorously engage with it; or capitalism have found the efficient means to divest Marxism of all its radical revolutionary potential and even to serve its own purposes to produce social relations to legitimize itself as an edifice of toleration and accommodation; this also tames a potentially radical petty bourgeoisie and assigns armchairs in place of streets and cropfields.  What we can get at most from such conference? An objectified volume of reified/ ‘critical’ knowledge eventually would pile up in the chic book shops and in young minds. What kind of ‘critical’ engagement are we expecting here? Who are the people who are speaking and presenting here? Can a conglomeration of left opportunists with little commitment to social transformation and unified communist politics produce radical knowledge? The answers point to a gloomy space and elicit condemnation.

However, we are not against publication and dissemination of Marxist texts. We indulge in reasoned debate and discussion, but that, based only on proletarian revolutionary practices and vanguardist duties. The distinction between theory and practice is the menace against which Marx, Engels, Lenin, Gramsci and many others have fought fiercely all through their lives and still in the battle ground through their work. Over-emphasis on ‘practice’ leads us to a pseudo-Platonic world of ‘pure practice’, whereas doing only ‘theory’ or performing politics exclusively in grandly mounted conferences reduces Marxism to a mere heuristical device, an analytical tool; thus stripping it off from all its transformative potentials. The formation and organization of this conference do suggest the latter tendency to us. Marxism is a dialectical unity of theory and practice which brings forth revolutionary subjectivity, anything less is conservative, if not reactionary.

The unholy marriage between coffee shop radicalism and the uninspired pragmatism of the mainstream and co-opted leftist platforms (who make up for a sizeable presence in this conference) results in the nebulous content of the same. Although one or two  panelist from peoples movements are there but ultimately exquisite hair-splitting and gimmicks take the place of an interaction, even altercation between academy and political workers. The goal of any sincere conference on Historical Materialism is to address and involve those who actually do politics on the field.  The crisis of revolutionary praxis has to be dealt with by showing the dialectical unity between theory and practice of Marxism and revolutionary politics. Any attempt to divorce one from the other from either will further jeopardize the cause of emancipatory politics. Moreover, Marxism is not a theory amongst many theories that are bought and sold in the academic bazaars. Unlike other bourgeois philosophy its life blood lies in changing the world for real.

6 thoughts on “Whatever happened to Historical Materialism?”